This forum shall be the workspace for the "Spacehey Open Call" project.

People will be added as they come. I'll be the reserve guy. I'll hop in whenever somebody bails out (hopefully never, but we are people...

) if nobody bails I'll go last.

With so many artists in one place (all of us are, because designing a space over here is a modern form of art imo), I'd really love to do projects together.
There are just so many positive things about it...

And it's a really fun thing to do.
I love teamwork and this place is just exploding from all the great potential from all over the world.

One of the most simple open call art projects I've seen so far is a open call chain (train).
Where we decide on one topic and we draw inspiration from each others artworks one after another.
In the end we get lots of amazing artworks with a fun connection.

Following is just an simple example.
Let's say we take the topic "horror".
Person 1 does a video on this topic and posts it.
Person 2 looks at the video, draws inspiration from it and because person 2 likes to express itself in photography posts a photo.
Person 3 is a musician, has a look at the photo and the video and does some music,... I think you get the idea. Do you?

It doesn't need to be original or perfect or anything like that.
We can do just what ever comes up to our minds, feels good and we're confident about. Chill and fun. No stress.

I think the most appropriate place here to do this would be the forums...

Is there anybody interested in such form of cooperation?
Has anyone done anything similar so far?
Any ideas, tips?

Haha. XD
A nice day to ya all!


Lets do something outta this world! :D
Yeah! I'm so thrilled and honoured!
Big thanks to every participant! Thank you!

Let's discuss the rules (and ideas) of the game (if there are/will be any) and lets pick a topic! ;)

What rules had you in mind?

I don't really like rules, but we have to have some to achieve something.

We must create a queue for the participants.
We can do it first come first served if you agree.

And we need to agree on one topic which will be the same for us all aka "the red line" of this project. Should be something we all like.

And we also need to agree on prohibitions. I have a couple, anybody can add theirs:
Strongly prohibited to post anything related to the following:
- anything related to paedophlia;
- any non-consentual sexually related topics;
- any strongly direct trans, gay, minority, racial and similar -phobic stuff.

Probably should leave politics and religion out of it, too.

arienette Very nice to see you on board! Welcome!

Let's gather around and meet up for a while. Maybe everyone could mention what art form he or she would like to use first (but not necessary) and also, we must still agree on a topic...
We can launch the ship as soon as we agree on the topic (also without me if I fall asleep) :D

Just whatever we like for an example I'll give five:
- strong women;
- chickens;
- poker:
- polyamory;
- golf 2 diesel car

i love this im so down

Mars Welcome to the spaceship! Woooohooo!

We're going to start tomorrow (or if you really want, you can start today already)
I think everybody understands how to play this... It's not hard.

That's amazing. We'll get us up together! :) Haha

ohhh that's cool and it's free

How about time travel?

This site is basically powered by a flux capacitor, like.

Kairabou Hi there! Welcome to the cool free club  :D

Very important!
We need a time limit!
What will be the time we give to every participant for one "turn" (to make and post his or her art)?
I was thinking about 24 hours. What do you think?

24 hours is probably enough for most artforms, also I think you should use "their" instead of "his" and "her", because those pronouns are not all-inclusive. :)

Besides I was thinking we also need a catchy name for the project which will be easy to memorize. I was playing in my mind with "SpaceTrain". What do you think?

Also I think it would be a good idea to open a separate forum or even a new spacehey profile where the final creations will be listed one after an other.
That would probably a good step for later, when we get the production running smoothly.
This same step would need some moderators (at least +2). Because I won't be here all the time long term. You know how life is, but the train mustn't stop. :D

So... I think most of the things are clear...
Maybe we wait for some more hours, maybe exchange some more words and we start the engine?
Today 10PM CET parhaps (thats in a little less than 9 hours)?

People will be added as they come. I'll be the reserve guy. I'll hop in whenever somebody bails out (hopefully never, but we are people... :D) if nobody bails I'll go last.

Yes! You have earned yourself a head start. :D
All the best being creative! :)

Getting right on it!

Yeah I agree. It's Collins idea. :) A nice one.
Soooo we kinda started already.

Colin Chaos
is already working on their amazing 1st contribution and opening up the project!

arienette
are you ready to start with your creation after Colin posts their piece of art (last time Sat 10PM CET)?

You should post your work till Sun 10 PM CET. And you should get (at least mildly) inspired by Collins creation.

Are there any questions perhaps maybe ideas or anything? If yes... Feel free to always use this forum! :)

(donno, should I be using *their or not... how do you prefer Colin? Am I even using it right?haha... hope so)

I'm passing on the headstart!

Finished!!
Fix It In Time

*They are working on *their project
;)
It's not for MY sake, though. I identify as male, so you can use male pronouns, but for other people who don't identify with either male or female, it's best to say they/their when speaking in general.

SpaceTrain contribution No. 1! "Fix It In Time" by Collin Chaos
https://posteenanx.bandcamp.com/track/fix-it-in-time

An amazing musical work by the first artist to open up the SpaceTrain open call project for artists!
You can check it out HERE!

Congrats @Collin Chaos!
All the respect for being such a dedicated participant!

Sooo!
@arienette, are you ready to leave ground?
We all hope you are! :)
I'm stoked to see and and/or hear your amazing piece of art!
Thanks to @Collin Chaos, you've got a head start too!
Please post your creation before Sunday 10 PM CET!
Topic is the same "Time travel" but you have a super bonus now since you may get some (more )inspiration from @Collin Chaos' bad ass musical contribution.

Good luck and lots of fun on your space journey!

So our inspiration is supposed to come from the project before ours?

Thanks for the question @Dollyweirdd, a great one. I've been thinking about this issue.

At this point from the projectS... Because we can't unsee what has been seen. :D The first participant has the least options of inspiration, the last one will have the most.
I've seen chains where they "hide" art from the participants and only allow them to see the one project which has been made before theirs to draw the inspiration from...
While it may be interesting to see the end product at this point I think it's not to bad we can see and admire each others work...
But the "original" rule should be "you get inspired by the work published before you".
After we finish with this topic we can try out a different/better set of rules.
This project shall evolve all the time.
We'll see what goes well and what doesn't go so well and adjust the rules at the end of each topic.
We all must have fun doing it. Not get bored and create as much as possible. :)
Discussion, ideas, suggestions etc. are very welcome strongly enforced. XD :D

Thanks for the kind words, @Hawk!

Looking forward to the next submission by @Arienette!!

I've always been gigging and recording, so I'm always just waiting for the next show!
Haha

@Collin Chaos Can be seen and heard!
It's also the only real way to actually become a long term successful musician.
Way to go!
Best of luck with your career!

@beeeeex3 said in a comment earlier their soopercool work will be finished any time now, so lets see what comes up.
Hopefully you post it at least till Monday 10PM CET but are encouraged to do it sooner if you can.

@Mars will you get ready to post your amazing creation afterwards? 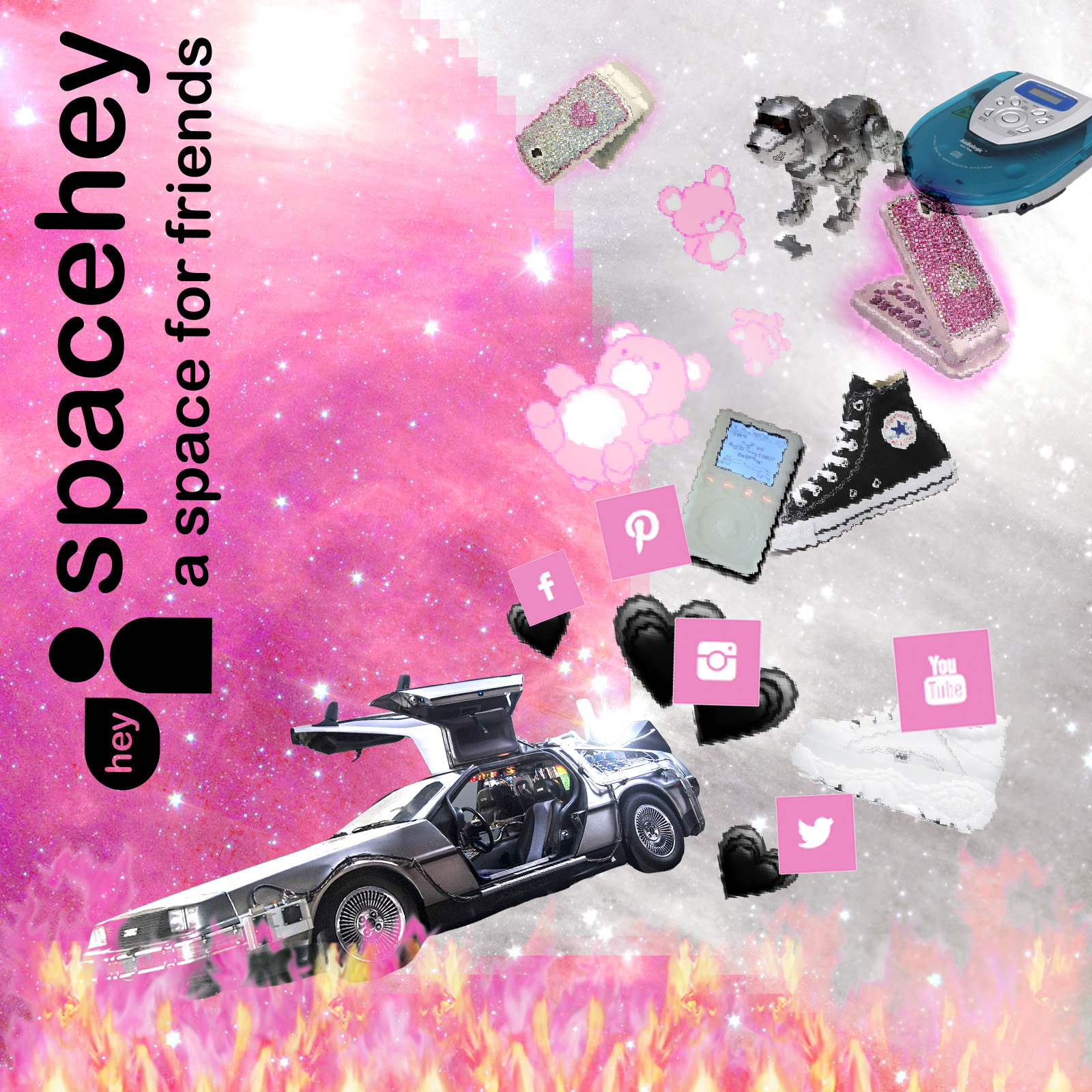 I made this after I listened to Colins submission, totally changed the direction I thought I was going to go and I love the outcome ^_^

I'm interested in what it would have been had I not corrupted your mind!
:P

here's my contribution to the time traveL!! ^,...,^ the other contributions were super dope, seriously y'all amaze me!

I'll post the Bulletin for you beeeeex3 in a couple of hours... :)
Braaavooo! :D

I got a question for you guys... Can you help me with the ideas?
Now that we have more works going on, Id like to do a gallery.
What do you think, should I make a Forum or a Blog post? Does anybody have a better idea?
I think opening up a new profile for this project is too complicated compared to a forum or a blog.
It has to be an option where each work can be embeded one after an other so it looks nice. :)
Your thoughts please. :)

Never saw THAT coming.
Very cool.
@Hawk, maybe a blog, because you'll have the reply notifications to keep tabs on things?

I love it how the artworks build a bigger picture together. :,)
Thank you fellow spaceians! :D I'm a happy. XD

Aaaand an other bulletin

thanks colin! your work was mindblowing, i cant imagine coming up with a whole SONG as quick as you did! loved it.

also, i'll hop on the blog hawk! i think that's a great idea because i have trouble keeping up with no notifications sometimes ^,...,^;
cheers to you for coming up with this hawk !

Just a small delay. Both are working on the project. :) Hopefully we see a new contribution today already. :)

:P
I was worried when I saw no update.

Haha. Might be. An other interesting feature of the travel machine. :)
Lets wait for another day and see if the other contributors post anything. If not I'm gonna post mine and we'll see from there...

Hey, workin on my bit. Just incase so you're not in the dust. Had some stuff come up yesterday. Hoping to finish by tonight/tomorrow, been working on it all day :)